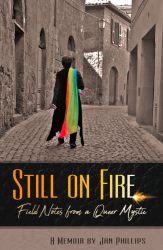 Still on Fire is another visionary book from thought leader Jan Phillips, an evolutionary work that connects spiritual consciousness with global action. A prophetic work of prose, prayer, and poetry.
—Deepak Chopra, MD

Unity Books is pleased to announce the October 2021 release of Still on Fire: Field Notes from a Queer Mystic by Jan Phillips. Still on Fire is a memoir of religious wounding and spiritual healing, of judgment and forgiveness, and of social activism in a world that is in our hands.

Author Jan Phillips was a devoted Catholic who wanted nothing more than to be a nun and who joyously entered the convent at 18. Two years later, she was dismissed for “a disposition unsuited to religious life, with excessive and exclusive friendships.”

She was lesbian. She had always known it. “It was being homosexual that made me want to kill myself [at 12],” she writes. “As far as I knew, there was nothing worse than being queer. They were perverts, sinners, hated by God, hated by just about everyone. Lezzies, bull dykes, fags, queers, lesbos—all damned, and there I was, one of them.”

Over the years, she created a life of love, service, community, and prayer. She evolved her understanding of God and came to see herself—and all of us—as the light of the world. “Had I not been born gay … my heart would not have broken in half, would not have opened itself to Love Supreme, would not have been tenderized by life’s bitter pounding.”

"After Jan's talk, we came away with a renewed commitment to our work, the inspiration to be more creative, and a greater sense of teamwork."

"This workshop was empowering. It helped me to clarify my goals and dream of some new possibilities. I appreciate Jan’s direct and supportive energy."

"There are many people presenting workshops on creativity these days, but few can match the power of Jan Phillips. Jan's workshop is an uplifting experience for anyone seeking to live a more creative life."

"In one weekend, Jan Phillips gave me food and fire for my passion like I’ve never had before. I see real and viable ways to change my work and live closer to the life I want. I am transformed, enlivened and profoundly hopeful. I will be making my income in a different way than I was before this seminar. My spirit, heart and brain kept firing all weekend giving me confidence and content for groups and presentations. I also have the know-how now to market and bring my gifts to the people who need what I teach. To anyone considering this workshop: Don’t wait! You can get started NOW to get your new life launched."

Jane Myers Drew, Ph.D. Psychologist Author of Where Were You When I Needed You, Dad? Creator of Let’s Connect! Game

"I was a participant in the recent workshop that you presented for the Dominican Sisters in Columbus, OH. What a great workshop. Everybody was talking about it long after you left, saying how special it was. Thank you so much, Jan, for doing this kind of work. I hope that you felt as affirmed as we did as a result of your workshop."

"Jan's facilitator training mirrored to me my most vital goals. She put into words the concepts I need to build and articulate my platform. The weekend dissolved my obstacles to success and gave me the infrastructure I need to be exactly the entrepreneur I want to be. Jan’s insights were invaluable."